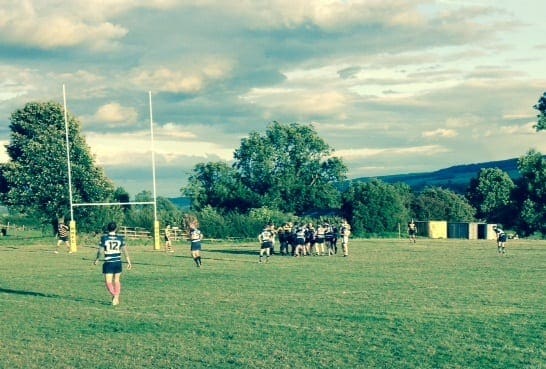 Following a great match last year, an Agricultural Industry XV, created by GSC Grays and Genus, took on Wensleydale Rugby Club in a pre-season friendly on Friday 22nd August, in aid of Macmillan Cancer Support, following the successful recovery from cancer of one of the Agricultural Industry team players.

The Agricultural Industry XV consisted of a number of local farmers, GSC Grays employees, Genus employees and clients and a number of others from the agricultural sector, including a vet and tree surgeon!  Both teams put on an excellent performance on the evening with James Blood, flyhalf for Wensleydale, putting in the man of the match performance.

Wensleydale had a point to prove this year having been beaten last year by the GSC Grays/Genus scratch side!  The GSC Grays/Genus team were unable to emulate last year’s winning performance and despite a close and hard fought game, Wensleydale ran in two late tries to flatter the scoreline as the Agricultural XV began to tire. Wensleydale ended the match victorious, winning 27 – 12.

The initial idea for the match came from Colin Lucas of Genus, who has himself successfully recovered from cancer and was keen to add his support to the hard work and dedication shown to him by the Macmillan Cancer Support team.  “Wensleydale were keen to take on the challenge again this year which was fantastic as the match kick-started their League winning season last year, despite losing to us and they had a point to prove!  Sadly, they did prove it!”

Phil Scott-Priestley, Director of GSC Grays who played in the match alongside fellow Directors and staff, commented that “The match proved a great success last year, both from a spectator and players perspective. It’s a gruelling but fun way to raise some money for such a great cause, whilst providing a bit of entertainment for those on the sidelines too.  This year to help raise more, we ran a charity auction on the night with some generous gifts from Sintons Law, EJ Churchill and GSC Grays, which helped to bolster funds and we would like to thank everyone who has given so generously and supported the event.  The fund-raising total is now at approximately £1,500.”

Anyone wishing to give a donation to Macmillan Cancer Support please visit: