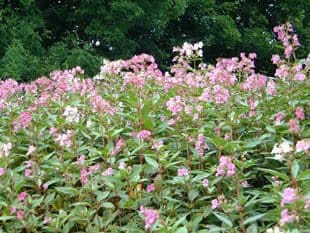 Following new EU Regulation and Community Protection Notices, it is becoming more and more important that landowners and property professionals are aware of UK invasive weeds. These include Japanese Knotweed, Giant Hogweed and Himalayan Balsam. In time this could also extend to species that are not yet present or widespread in the UK, such as Ragweed.

This issue has been highlighted following the reform of the Anti-Social Behaviour, Crime and Policing Act 2014 and associated community protection notices. These can force landowners to deal with these plants with fines of up to £2,500 for individuals and £20,000 for Companies who fail to tackle invasive weeds.

In addition, EU regulations that came into force in January 2015 could lead to fines and prosecution if invasive plants are not managed appropriately or in a timely fashion. Government agencies are empowered by the regulations to issue control orders to remove high risk species from specific areas, such as residential properties, construction sites, public land, derelict sites etc.

Both measures promote the ability to rapidly respond, should an invasive weed invade a property or asset.

Invasive weeds continue to be a focus for land and property professionals due to the consequences of their presence. Giant Hogweed raises a significant health risk as the sap is extremely toxic to skin in the sunlight which causes blistering which can then reoccur over a number of years. This therefore causes an issue when its location is accessible by the public, thus increasing the likelihood of people being injured. Japanese Knotweed is a growing commercial problem due to its ever increasing presence in urban areas. If present on development sites it can cause damage to services and structures and can cause issues when trying to secure a mortgage if it is located within 7m of a building. Himalayan Balsam is more of a concern as to its effect on watercourses rather than the health implications of Giant Hogweed and the economic impact of Japanese Knotweed. The plant has spread rapidly and continues to do so in lowland areas along rivers and streams. The plant can stand up to two metres in height and at times of flood seriously impede the flow of water. It then dies back in the winter leaving the river banks exposed to erosion.

Before proceeding with any works it is important that further guidance is sort from the Environment Agency and the local council.

Government guidance on UK Invasive Weeds and how to control them can be found by following the link below:

Should you require advice on the issues raised, please contact: