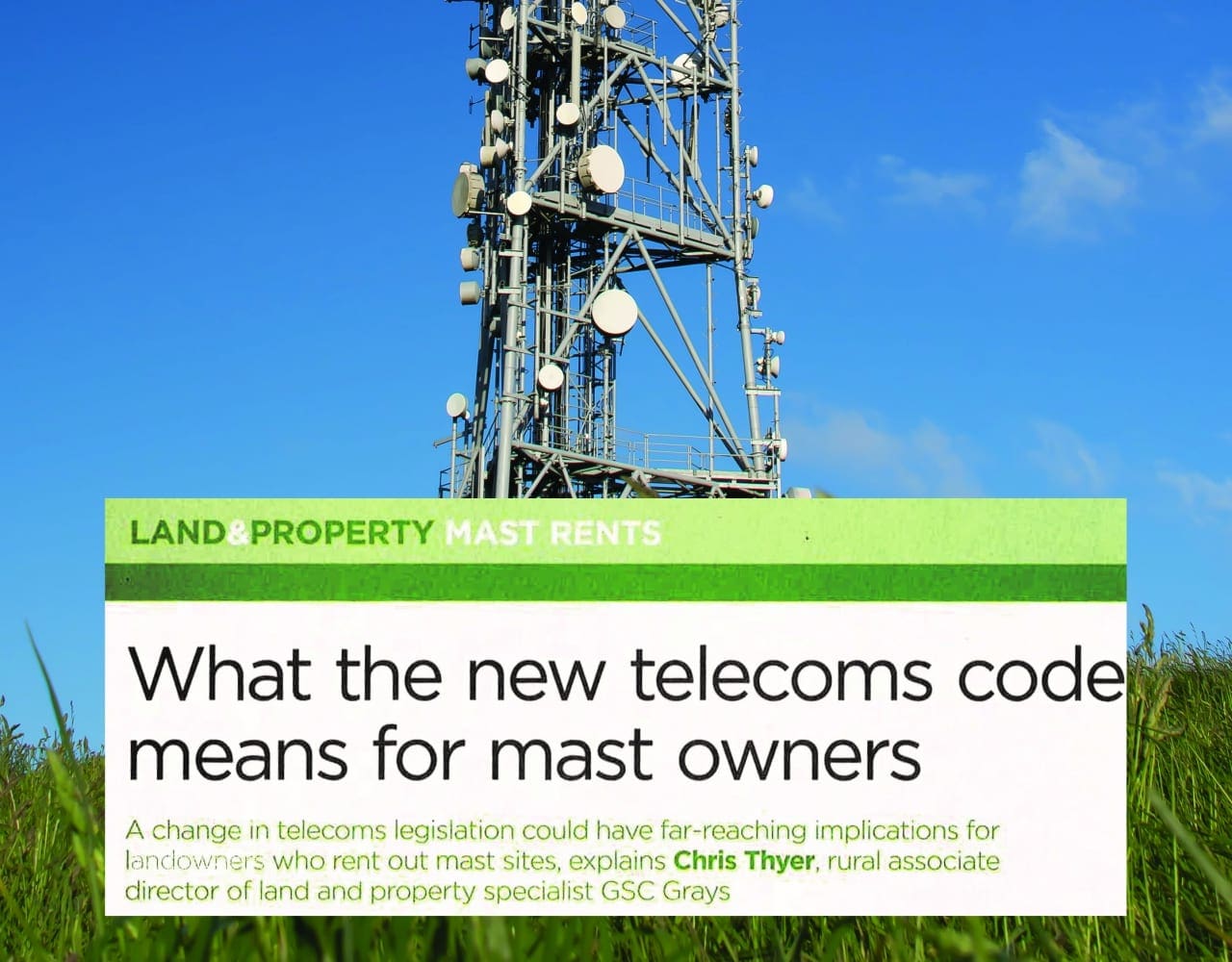 A change in telecoms legislation could have far-reaching implications for landowners who rent out mast sites, according to a property specialist.

For several decades landowners have benefited from additional income generated by renting out telecoms masts, which have mainly been used to expand mobile phone signal and WiFi coverage.  Many of the lease agreements are the result of negotiations between two parties, meaning rental fees can vary between hundreds of pounds to thousands of pounds a year.

However, the introduction of the Electronic Communications Code in December 2017 has given new powers to telecoms companies, explains Chris Thyer, Rural Associate Director of land and property specialist GSC Grays.

This means site owners should take advice before they renew existing agreements or enter into new contracts.

“The legislation has changed because mobile phone and broadband coverage is considered by the government to be as essential as utilities such as water and electricity,” said Mr Thyer.

“In the past a landowner had the right to refuse to rent out a mast site, but the new rules mean that operators can apply to the court to impose an agreement on the landowner without their consent.

“It will also be very difficult to have an existing mast removed, unless the operator persistently fails to pay rent, or the site is awarded planning permission for an alternative project.”

The market for new mast sites is now close to saturation point and operators continue to attempt to drive down costs. Mr Thyer feels that some of the rents being offered for new or renewal agreements are too low and do not reflect the true value of the transaction.

“I have heard of agreements being proposed for as little as £150 a year for one mast,” he said.

“As a ball park figure, a mast should be generating several thousand pounds a year in rental fees.”

The landowner does not have to accept what is considered a low rent and can seek professional advice for renegotiating arrangements.

The mast operator will also be liable to pay the site owner’s legal fees if the issue cannot be resolved and it is left for the court to decide.

“Rental figures set by the courts over the next few years are likely to influence the market for the next generation to come,” he said.

One element of the law that may come as a surprise to some landowners is the legal position when a lease arrangement comes to an end, he added.

Once the lease period had expired, the agreement will continue to run and the landowner can continue to collect the rent, unless action is taken by either party.

“I would recommend maintaining any lease which produces a reasonable rent in this rolling position, until the new legislation has been further tested,” said Mr Thyer.

“Unfortunately, in the current climate, I do not foresee many opportunities arising that will allow the site owner to increase the annual fee that applies to existing contracts.”

New laws applying to mast sites are largely untested, but with the market almost saturated, operators are offering low rental fees. If a mast operator is offering a low rent, the landowner is entitled to paid-for professional advice to help reach an agreement

In cases of dispute, the mast operator is obliged to pay the site owner’s legal fees

When telecoms legislation was first introduced in the 1980s, individual companies had their own installations, but the trend towards mast-sharing has changed the market beyond recognition.

Historically, landowners could charge additional rental fees to each of the sharers on top of the payments made by the original tenant, as long as this option was outlined in the lease agreement.

However, the new Electronic Communications Code does not allow this practice.

“In the past, the law allowed a site owner to charge a £2,000 annual rental fee to the original tenant, for example, but extra charges to site sharers could add up to £20,000,” said Mr Thyer.

“The right of the site owner to charge these extra rents has ended, since the introduction of the new code. This will apply to any lease, once it has expired. Landowners can no longer charge multiple rents on new mast sites, or on existing sites, once current leases have expired.”