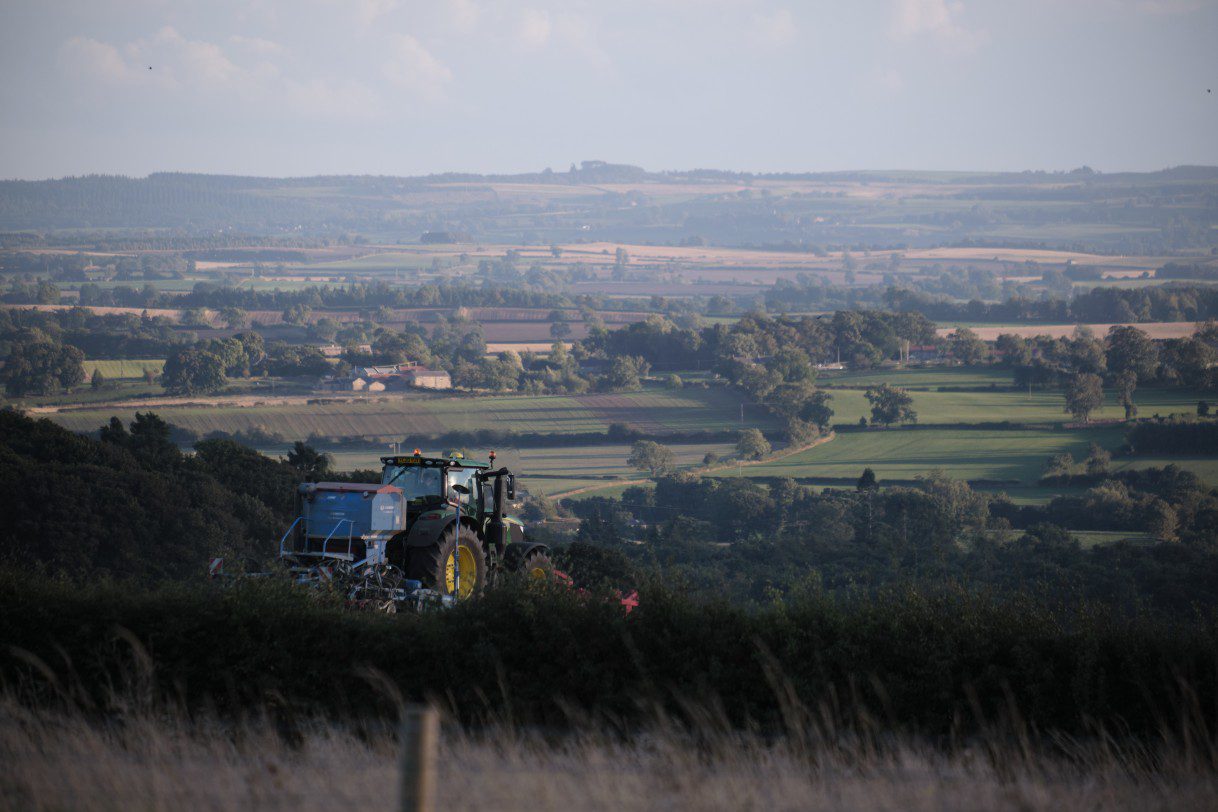 Supply to the UK farmland market has increased year on year with around 55,000 acres being offered for sale on the open market according to the Farmers Weekly annual tally to the end of September.

Demand for this land has been steady, driven, in the main by farmer buyers but also by lifestyle and institutional buyers with a keen eye on environment and sustainability opportunities.

In our region of North Yorkshire, County Durham, Northumberland and Cumbria, we have a similar message to report with supply levels up across the market sector with noticeably more arable acres (although mainly in bare land parcels) than in recent years.

Farmers have been more active than non-farmers than in recent years with rollover funds released from the increasing demand for house building land, driving prices through competitive bidding, particularly on prime arable land. 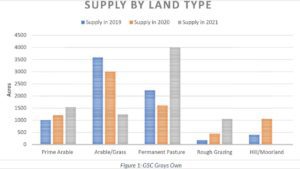 Competition is also increasing from several sectors on more marginal and hill land driven by demand for tree planting and other environment and sustainability criteria.

Whilst discussions around possible retirement have become more regular, encouraged by the ‘lump sum exit scheme’, ultimately decisions on whether to leave the industry have come down to timing rather than any meaningful retirement incentive. Selling while demand is high and bidding competitive, has been much more likely to achieve a larger retirement pot, further supported by a favourable capital tax regime.

Much less has been said about the impact caused by lifestyle buyers moving to the countryside in the search for more space. Such demand impacts on smaller land parcel sales and can distort average farmland price figures if not carefully analysed. Even with CGT to pay, small parcel sales can be hugely profitable for farmers selling to these buyers, but it makes it overly expensive for those wishing to add to their existing farm holdings.

In summary, arable, rotational grass and most permanent pasture has seen values measured in low single figure increases this year as supply has generally been met by demand. Average prime arable land in North Yorkshire and the North East levels out at approximately £10,800 while rotational grassland is averaging £8,000 per acre as shown in the graph above taken from our own data sourcing. 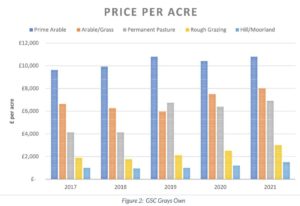 Grassland farms in Cumbria and West Northumberland are averaging at approximately £6,500 per acre.

The most dramatic changes have been on rough and hill ground with some extraordinary bidding experienced in the hills of the Dales and the North Pennines. The main driver is forestry planting land with bidding from private individuals, consortiums, ESG motivated funds and institutions battling it out for a limited number of plantable acres.

Prices of £4,000 per acre are being offered without planning consent for afforestation. This translates through to equally exceptional prices being achieved for mature forests with timber prices at their highest level for many years, and supply in our region very limited. Buyers are generally heading for Scotland for greater opportunity with prices for the best mature woods exceeding £12,000 per acre (£30,000 per hectare).

Forecasting next year’s market trends is increasingly difficult with new market influences entering the arena.  We remain unclear how much natural capital will influence land values, nor the level of demand from big business or institutional investors with ESG their motivating interest.  BPS payments will be further reduced, but hopefully the value of support through Environmental Land Management (ELM) will become clearer but there is no doubt that the focus will move the market further away from food production and closer to creating greater natural capital.

We have been expecting for some time now, changes to be made to the treatment of capital taxation on our farms and land sales.  The removal of Agricultural Property Relief is all but inevitable and if it is not announced in the October Financial Review it will surely be delivered in the Spring 2022 Budget.  This will impact most on those who have bought farms to shelter wealth from Inheritance Tax, usually non-farming buyers and this may well curb demand and impact competition in the market.

There is still some way to go before the impact of all these changes will be felt in the land market and we therefore predict that the old influences of supply and demand will be the simple drivers of the direction of land prices next year. Increases of between 3% and 5% are expected on average although if the clamour to buy land for tree planting continues to grow, significantly greater increases could be seen on suitable planting land.

Get to know John