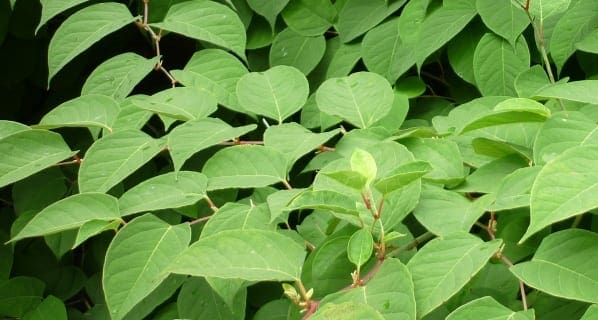 Akin to something from “Day of the Triffids”, Japanese Knotweed (Fallopia Japonica) is an extremely invasive, virulent and fast-growing herbaceous plant. The plant was originally imported from Eastern Asia by plant collectors during the 19th Century due to its attractive aesthetic appearance of red stems and lush green leaves.

However, it is far from being a pleasant ornamental garden plant and has become a modern day menace particularly to property owners and developers. Japanese Knotweed grows vigorously and has a rhizomatous root network, which is literally capable of growing through and breaking up concrete foundations, buildings, tarmac roads and paving!

The species is extremely difficult to eradicate once established as it is resilient to cutting, with only extensive herbicide treatment and excavation (up to 3 metres in depth) enabling sites to be cleared and remediated. Given the labour intensive work required, the costs can literally run into tens of thousands of pounds and it is imperative that all traces of the plant are removed, as leaving even a few inches of root will result in it quickly growing back.

Japanese Knotweed is in fact listed by the World Conservation Union as one of the World’s worst invasive species. Under Schedule 9 of The Wildlife and Countryside Act 1981, the acts of planting Japanese Knotweed or causing it to grow in the wild were criminalised, whilst, the Environmental Protection Act 1990 categorised Japanese knotweed as “controlled waste” requiring licensed disposal. Despite these legislative measures it still poses a significant problem across the country with DEFRA’s review for the eradication of Non-Native species across the country being estimated at £1.56 billion. Japanese Knotweed alone is estimated to cost the UK economy £166 million per year for treatment and property devaluations.

The introduction of the Anti-Social Behaviour, Crime and Policing Act on the 20 October 2014 included provisions to require the removal of Japanese knotweed by landowners. The legislation gives local authorities the power to impose “Community Protection Notices” on any individual or organisation whose unreasonable conduct is having a persistent or continuing detrimental effect on the quality of life of those in the locality. Whilst the Act does not specifically refer to Japanese Knotweed the Home Office have indicated that allowing the plant to grow unchecked over your land or property will constitute unreasonable conduct. The 2014 Act applies to residential property and to all other types of land and as such, it is relevant to all landowners.

A Community Protection Notice may impose a requirement upon the individual or organisation to which it is issued, to require the removal of the Japanese knotweed from the land or property within a certain period. Failure to comply with such a notice without reasonable excuse is a criminal offence and may result in a fine of as much as £2,500 for individuals and £20,000 for organisations.

Japanese Knotweed is a highly undesirable plant, which landowners are legally obliged to eradicate as soon as possible in order to preserve the value of their property and mitigate any damage to land, buildings or structures. Several banks and mortgage companies have refused mortgage applications as a consequence of the plant being discovered in the garden of a property or a neighbouring garden. However, following a report issued by the RICS in 2012 and the adoption of a systematic categorised approach with a scale of 1-4, (4 being the worst case scenario i.e. knotweed within 7 metres of a building) some lenders are adopting a more considered approach reflecting the circumstances of the case. In fact a property may now be deemed acceptable security by some lenders provided that appropriate remedial measures have been undertaken by a Property Care Association (PCA) registered firm with the treatment having a 10 year insurance backed guarantee.

Beware and be vigilant as Japanese Knotweed could be lurking at the bottom of the garden!